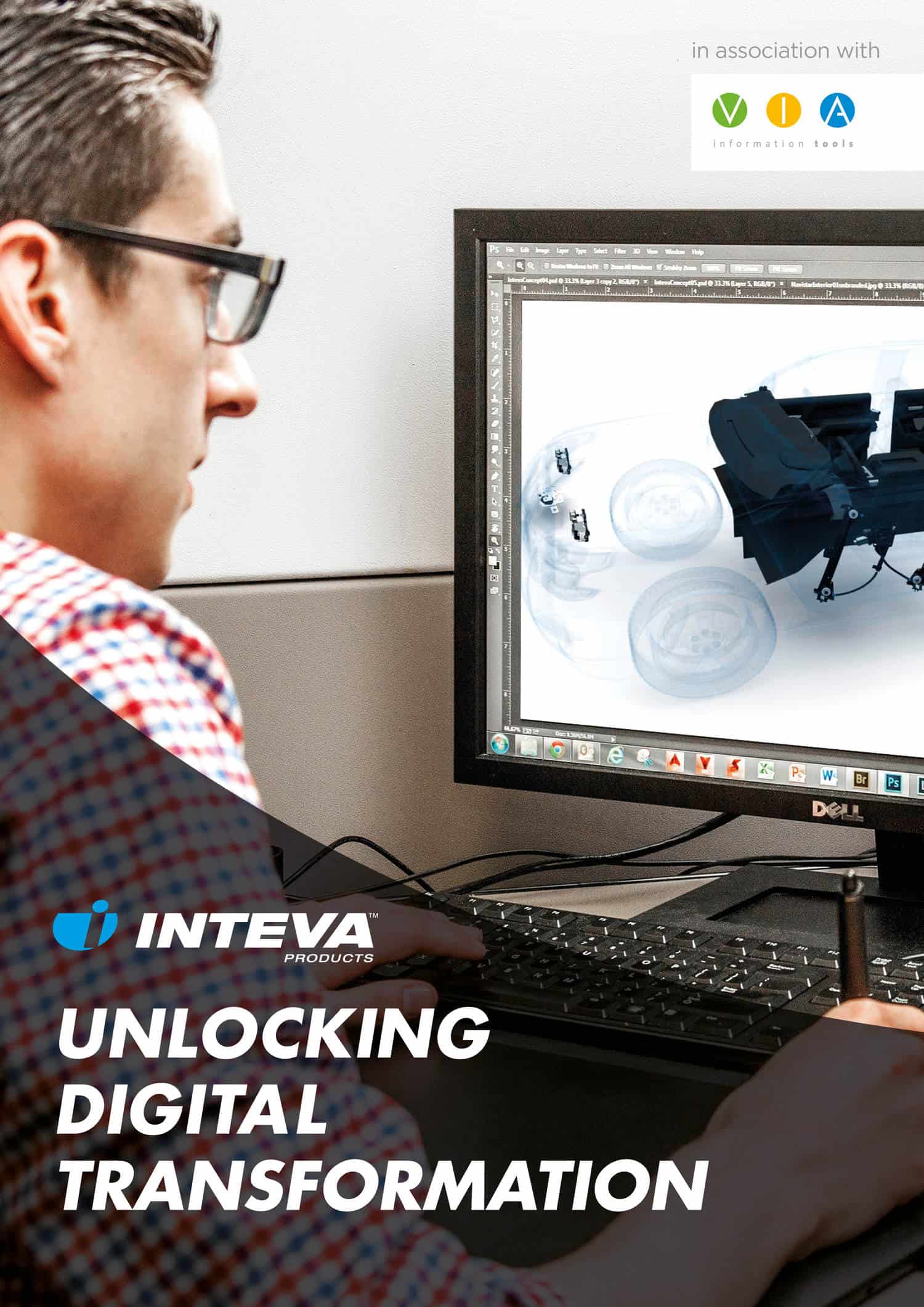 CLICK this brochure TO VIEW in our PAGE TURNING format
Inteva Products, a major supplier of interior products to the automotive industry, has been working hard to unlock the benefits of digital transformation, both in its manufacturing and...
WRITTEN BY: admin - April 10, 2019

Inteva Products, a major supplier of interior products to the automotive industry, has been working hard to unlock the benefits of digital transformation, both in its manufacturing and back-office operations. We spoke to Dennis Hodges, Inteva Products’ Chief Information Officer…

The automotive industry is in the midst of a revolution. Hybrid and electric vehicles (EVs) are threatening to displace the internal combustion engine, while other new powertrains such as the hydrogen fuel cell may repeat this disruption in due course. In addition, autonomous cars are already on the roads in small numbers, while semi-autonomous cars are more than widespread.

Exciting as this might be, however, it is already yesterday’s news: we all know that tomorrow’s car will be very different from today’s. Less well-understood, though, is that the industry itself is being revolutionised by digital technologies that don’t grab the headlines as automation of the motor industry means much more than self-driving cars. Indeed, much work is going into streamlining both industrial and administrative processes that drive car production.

Dennis Hodges, Inteva Products’ Chief Information Officer says that one of the company’s first moves was to change its enterprise resource planning (ERP) software to a cloud-based solution with a specific automotive focus. “It’s called Plex, an ERP system for manufacturing and a couple of other smaller verticals,” he says.

Plex Manufacturing Cloud is a software-as-a-service (SaaS) ERP system and, on one level, it sounds as though the decision was simple: “It was more automotive focused and much cheaper,” says Hodges. However, the move was not motivated solely by the bottom-line: SaaS solutions may be less expensive in certain circumstances, especially in terms of reducing capital expenditure, but choice of platform will always rest on a wider business case.

“It was really three things: getting more from the technology, moving costs from cap-ex to op-ex, and getting a better solution for our business,” he says. Hodges notes that many other automotive suppliers have already adopted Plex Manufacturing Cloud. In choosing to implement it, though, Inteva Products – headquartered in Troy, Michigan – had to ensure that the software suited its business: supplying interior products, closure systems, motors & electronics and roof systems to all of the global automotive manufacturers, including, in a sign of a changing world, rising companies in China.

For Inteva, this results in a complex supply chain from its suppliers through the component manufacturing process to the end manufacturers and Plex Manufacturing Cloud had to be able to handle this. “We are a manufacturer of some components, and then we buy other components from suppliers. A lot of final assembly is done in-house,” Hodges explains.

Despite its size, however, Inteva has been able to act nimbly in implementing a new ERP system; something auto manufacturers themselves have typically been slower to adopt. Nonetheless, Hodges says that a drive toward efficiency in this complex process helps to meet the company’s key goal: to keep its customers happy. “I think a lot of [automotive] OEMs (original equipment manufacturers) are still looking at more traditional [ERP] systems because a lot of them are just so much bigger. Our job is to be the nimble organisation that can supply parts to them faster and cheaper than they can do it themselves,” he says. Indeed, this is, he says, key among what Inteva brings to the table.

“Certainly, I won’t say [that our parts are] better [than those manufactured in-house by automakers] because I don’t think they would ever agree with that, but I think ‘faster’ and ‘cheaper’ would definitely be words that they would use in tier-ones or tier-twos,” he says.

The notorious Takata airbag recall is one example of how supply chain issues echoed throughout the entire industry: from 2013 tens of millions of vehicles with Takata air bags were recalled due to failures following long-term exposure to high heat and humidity that had the potential to cause the air bags to explode on deployment. The recall is ongoing to this day, and a number of deaths have been attributed to the faulty airbags. As a result, traceability has become the number one issue.

“The key really comes down to the ability to [trace] – especially now the word Takata has entered the dictionary, or at least the local vernacular as something terrible in warranty recall.” Hodges explains. This concern resulted in Inteva’s adoption of VIA’s Man-IT. “Takata, that was kind to me; a watershed in that all of a sudden we [automotive suppliers] were being asked to do traceability of parts that maybe we’d never been asked to do so much detail on before even though they [the traceability requests] weren’t necessarily safety related [in the case of Inteva’s components],” says Hodges. “Airbags, of course, should have been monitored all the way through,” he says. Inteva now has traceability of raw pellets made by plastic manufacturers as far back as its production and transportation to the manufacturing plant.

Traceability is not the only issue that drove Inteva to implement VIA’s Man-IT for traceability, process enforcement, machine data gathering, precise labelling and sequencing. The simple fact that manufacturing is not such a simple business was a major factor. “It’s not only complicated because of safety regulations but it’s also very much a global supply chain,” he says. Indeed, Inteva, which traces its roots back to 1872, is itself a global organisation. Expansion in the last decade has seen manufacturing sites opened in Guanajuato in Mexico, Oradea in Romania, Zhenjiang in China and Rychnov in the Czech Republic, as well other facilities in India, China and the Netherlands.

Meeting OEM and government regulations isn’t the only benefit of using traceability systems like VIA’s Man-IT. Once the data is gathered regarding the parts, processes, people, and activities in the plant, on an ongoing basis, that data can then be utilised to improve performance. Traceability systems can drive higher yield, lower scrap, and efficiencies in machine utilisation as well as materials management.

“VIA’s Man-IT system has been critical to Inteva over the past 15 years in providing a system to manage everything from interfacing to production equipment, managing production lot testing to sequencing into a major automotive customer,” Hodges explains. “In the past couple of years, Man-IT has also been a real enabler for our drive into IIoT/Industries 4.0 as the receiver of information from production equipment and bringing that into our ERP and visualisation systems.”

Predictive maintenance is a major factor in the implementation of internet of things (IoT) technologies in the automotive sector, though this is obviously not an issue for, for example, trim parts and other items with no moving parts. As for its actual products, Inteva’s components include closure systems, doors, latches, actuators and sunroof motors, as well as interior trim. Even those that do include moving parts, such as latches, are designed as zero-maintenance products. “The plan is that zero maintenance is ever required,” says Hodges.

The fact remains, however, that digital technologies have already transformed what is expected from a car, and, with 5G wireless technology on the horizon, even more dramatic transformations are expected as cars grow ever more autonomous as part of the so-called ‘smart city’ infrastructure already planned for major urban centres. Of course, this also brings questions such as IT security to the fore. “You know, we’re an auto supplier, but looking at it from the auto side, the concern I see from an IT perspective is cybersecurity. The electrical engineers are so [focused] on what they can do that they don’t think enough about what they should do, and how to protect what they have.”

As this digital transformation works its way through the industry, Inteva is seeking to stay ahead of trends: IT security concerns will extend to locks and latches as well as sunroofs, of course, if not to interior trim. Inteva’s drive toward digital transformation does not begin and end with office-based work such as ERP systems. Instead, it extends to the shop floor. “For us, what we’re trying to do is basically in the ‘industrial internet of things’ [IIoT], which we’re working with to look at both sides of the operating equipment,” says Hodges. In practice this means working with sensors and wireless connectivity to get a live, ongoing picture of how plant equipment is performing.

“An injection moulder, for example, is a million-dollar piece of equipment, so not only do you care about the production side of that equipment, but you also care about the internals of that machine. Whether it’s oil temperature or other operating parameters, you want to start tracking that,” he explains. This way, production can be predicted according to factors such as ambient temperature and humidity levels, for example, and there are also obvious benefits in terms of predictive maintenance.

“When we have a 90-degree [Fahrenheit] day with 90% humidity in Mexico, production can be up or down. We see that as a trend we can start preparing for. For example, we may know that in the summer we will want to run more shifts at night than during the day, as the temperature is cooler. Little things like that really go a long way for us,” says Hodges.

Of course, little things in aggregate become large things, and this is also true of data volume. IIoT technologies typically connect tiny amounts of data, but, says Hodges, it soon adds up. “I would say that most of our data at this point is still gathered by the older traditional methods, particularly on the operating equipment itself, but it is amazing. The amount of data that can be generated with 30 parameters being read every minute is not a lot of data at the time, but if you try to keep historical trends it really does start adding up to a lot of data,” he explains.

The business of industry

The hard reality remains that manufacturing requires investment and equipment that has not yet been amortised and will not be replaced on a whim. However, the goal of creating greater flexibility on the factory floor is still achievable. “With real multi-million-dollar equipment, you’re not just going to replace it because there’s a better way to connect to it,” says Hodges. “We try to do things incrementally and evolutionarily rather than revolutionary.”

The end result can be something of a revolution, nonetheless: with wireless added to the picture machinery can be moved around to increase or decrease production on specific lines as demand changes. “You really don’t want to hardwire anything you don’t have to anymore.” Previously, attaining this level of flexibility was close to impossible. It was also financially difficult.

“You can move a line more quickly; not that you’d move a line every other day or something like that, but the ability to move it to another part of the plant without rewiring is a positive alternative to dropping $50,000 or so just to put in some more wiring. If you’re going to do that a couple of times a year or do that for a 1mn sq. ft plant where you could be looking at doing it 10-15 times a year, previously, you were looking at throwing away half a million dollars.” 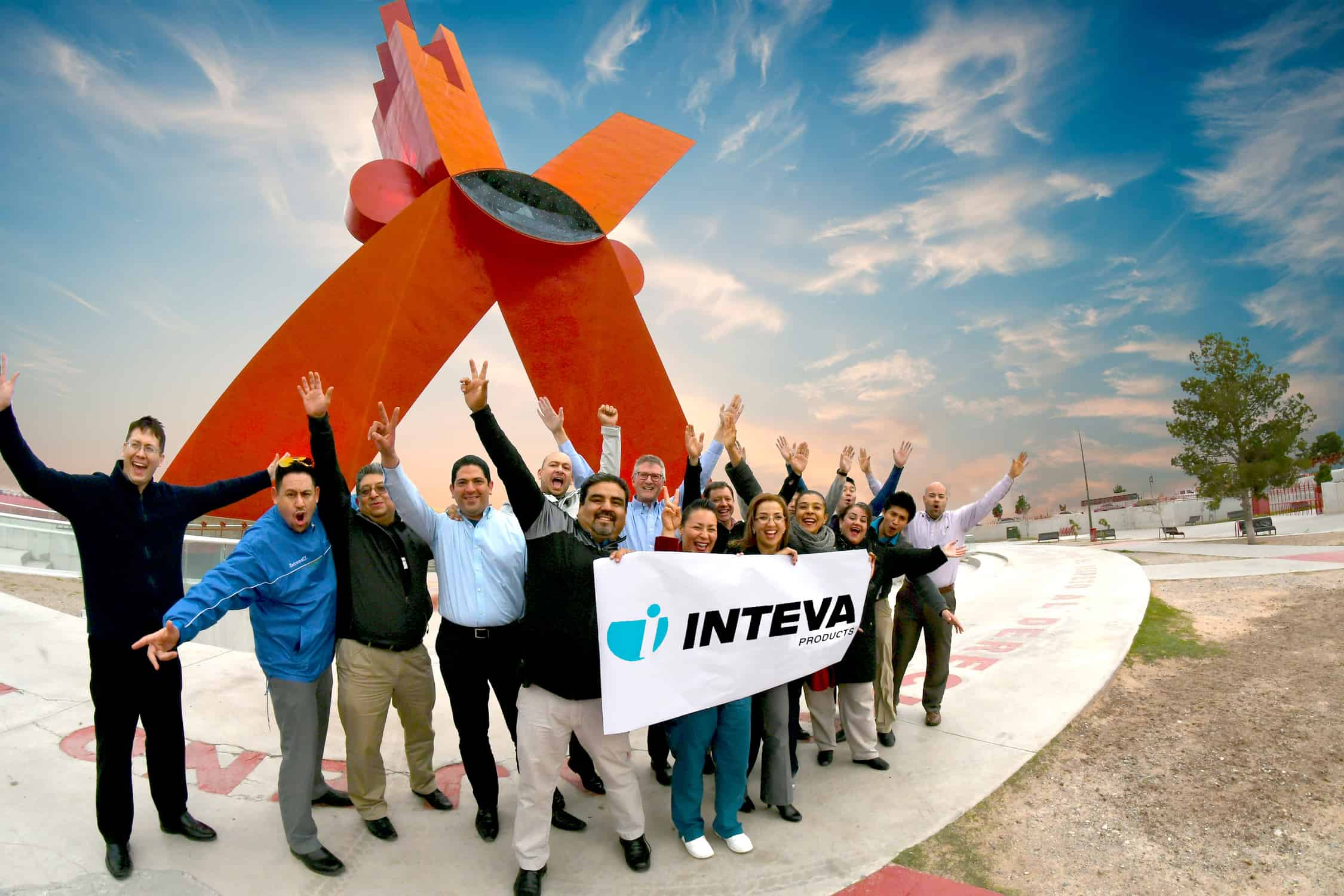 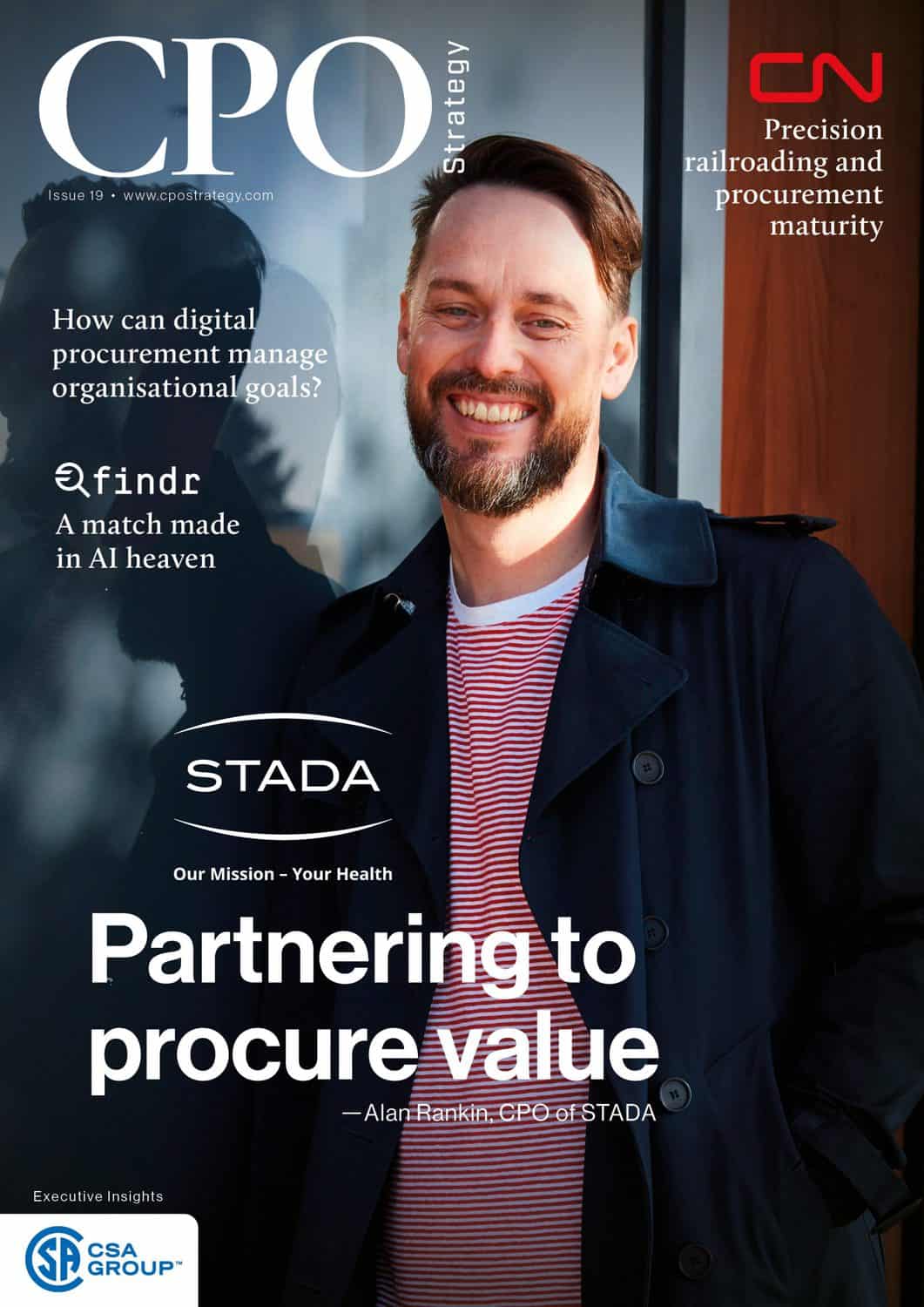 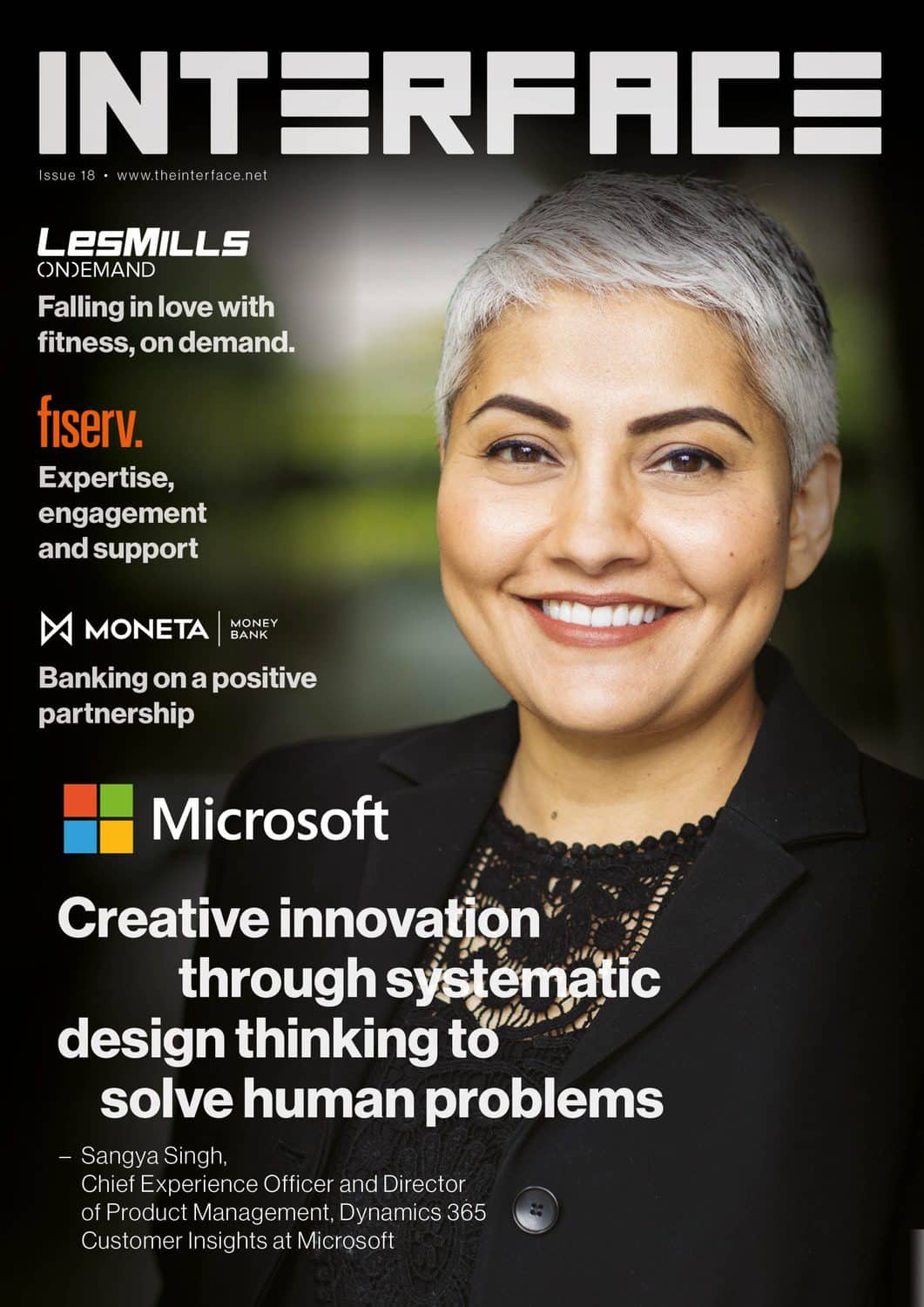