A global leader in procurement and supply chain, Sam Achampong is Head of CIPS MENA, and responsible for influencing supply chain and procurement transformations across the region… Listen...
WRITTEN BY: Kevin Davies - May 24, 2019

A global leader in procurement and supply chain, Sam Achampong is Head of CIPS MENA, and responsible for influencing supply chain and procurement transformations across the region…

Listen to the podcast here!

So, could you give us a brief outline of your role at CIPS MENA?

CIPS works in a number of ways. I guess if you look at a triangle, there’s three main areas we work in. One is education, and that’s around our qualifications. Another is around thought leadership in terms of the events and social networks we create. The other is around our B2B operations where we work directly with organisations to work on the capability development of their own procurement teams, and their procurement organisation.

The operation in the Middle East has been around for about 10 years now. In terms of the region, I think we acknowledge that the level of maturity in procurement is in many ways a little bit behind more established areas of the world. But over the past 10 years that gap has been closing. So, we’ve seen some significant strides in terms of how people view procurement, and how strategic people see procurement. However, there remains a lag in recognising it as a strategic function. We continue to work with organisations and individuals in this region to improve that.

What are challenges procurement is facing in MENA at the moment? Skill shortages or technology uptake?

The other thing is the recognition of the profession itself. So, when you go above the actual stakeholders around procurement, your CFO, CEOs, the C-suite and others, the recognition of procurement as a strategic function is lacking in many ways here. So, what that means is, you find that a lot of procurement departments are being used as transactional departments, who are either performing a compliance role, or a simple transactional role. So, that obviously diminishes the role of procurement and diminishes the effectiveness of what procurement can deliver in this region. really is a lack of depth in the market of people who have those skills when they are called upon. So as a result, you cannot look to a major organisation or a particular job description, procurement category manager, for example, in a major bank and assume that they have the necessary skills that you would expect a procurement IT category manager to have. Because there just isn’t that depth of skills in many areas.

However, as I’ve said, there have been big strides over the past five to eight years to improve that. So, there are real centres of excellence around the region who have been working for a long time to overhaul their entire departments. You’re talking about some of the major organisations like ADNOC, the major oil company, or SABIC in Saudi Arabia, around to Etihad Airways in Abu Dhabi, who’ve been working very hard for a few years to ensure that procurement becomes a strategic function, and that the people who work in it are professionals.

Would you recommend more professional qualifications being introduced in the region?

Yeah, that’s the other side of it. So, there is looking for people in the market who already have those skills, that’s one side of it. The other side is putting together the infrastructure, whereby people are able to get hold of those skills. So, that’s the backbone of what we’re trying to do. We set up several study centres across the region where people can go and study CIPS qualifications anywhere around the region from Lebanon, to Bahrain, to Saudi Arabia, to the United Arab Emirates, to Egypt. In addition to that, we’ve worked very closely with a lot of organisations to set up in-house procurement academies, whereby we work directly with them to upscale their teams to the highest level over a period of time. There are two areas in which we work. One is the B2B, and the other is just for the B2C where you have the student network and the individuals who want to attain those skills.

We’re working with a lot of the educational establishments to work with them to ensure that procurement qualifications, skills and standards are available in the local university network. So, we’ve done that across the region, where we work with centres of education, to help them put in place skills and qualifications that are commensurate with leading procurement practice.

I guess, the other side is away from the people. It’s a case of how people actually do procurement. So, what are the strategic games, what are the processes, practices? We’ve also worked with several organisations to provide advisory services to look at how they actually do procurement and guide them into putting into place procurement practices that are leading practices to help achieve value. You’ll see organisations like the Dubai Expo 2020 project, who have recently gone through what we call the CIPS Procurement Excellence Program, where we review how they do procurement and guide them towards best practice.

Have you encountered a stark contrast between, broadly speaking, the Middle East and the North Africa region?

When you look more to North Africa, Egypt is a very populous and academic country. So, you do find a lot of people from the academic perspective, who have come through a level of education to attain procurement skills; maybe not to the highest level, in terms of strength and depth, but that’s the angle that happens in North Africa rather than companies sponsoring people to go through qualifications.

So, there are differences between the Gulf, North Africa and West Africa and several subtleties between the public and the private sector. But interestingly, I think what’s happened over the years is that there’s always been a gulf in the maturity levels of the practice of procurement and many other professions. What’s happened over the last two or three, or three or four years is the advent of technology. So, there’s an element now where people are looking to leap frog the long route of getting people highly qualified and educated in procurement and are instead trying to invest in technology to do that procurement for them, which makes sense to a certain perspective. But obviously, the caution has always been to make sure that whoever is working on procurement for you, in terms of people, are highly skilled commercial managers, because it’s clear that you cannot rely fully on technology.

I can recall one particular instance where the prerogative was to try and eradicate as much as possible, the ethics and procurement fraud from the procurement life cycle. So, the solution that was being implemented was a whole-scale eSourcing suite, which is a good idea in terms of transparency. But of course, the fact is that probably 80% of procurement fraud is carried out at the specification stage. So, you still do need to work on the people, otherwise, you’re not really eradicating the problem.

You touched upon ethics, and obviously transparency within the supply chain is a hot topic globally, so I guess within MENA, building trust is a very important part attracting foreign investment, for example…

I think you’re right, and for any country or region that’s looking to attract foreign investment, it’s incumbent on them to create an environment conducive to that investment coming in. And key to that is procurement, the reputation of how business is done, and how supplies interact, and how organisations are gained through those transactions across the supply chain to obtain value is absolutely crucial to attracting investment.

So, ethics is key. We work with a number of organisations across the region, specifically on that subject. In fact, there are several organisations who now have the CIPS Ethics Kite Mark where all of their team have, specifically on that subject, been trained in ethics. The organisation can demonstrate that people within their team, as long as they procure anything, they have a full knowledge of what the subject is. Now, if you look at some statistics, and in terms of the effect on procurement, I think procurement fraud is like taking up 20% of the cost of doing business in developing countries, and 10% of the cost of doing procurement anywhere else. So, I guess for those areas of those countries who can ill afford it, that becomes a really, really important topic to address because it directly affects their affordability to invest in infrastructure and other areas, as it’s adding to the cost of doing business.

Technology is driving a lot of the procurement transformation stories at the moment and obviously MENA has had sort of issues such as the uptake of technology in the past an concepts such as cashless banking, plus they’ve had cyber security weaknesses. What kind of challenges have you seen there with regards to the technological side of it?

People have access to the latest technology, and people do have access to, and are able to purchase, the best solution they can afford. So, if there is an issue that it’s sometimes a case of people over specifying what they want. So, an organisation may have acquired the latest ERP or eSourcing suite, or solution, that is applicable to their operations, and to a certain extent, other organisations have seen that and said, “Okay, well, we’ll have that as well,” without aligning it directly to what they need.

So, you have people looking at developing marketplaces, where they haven’t thought about it before. A lot of organisations are creating their own marketplaces where everyone could be a buyer, rather than continue to centralise procurement across the procurement team. So, they are making use of those cloud-based systems and those marketplaces enabled by some of the technological solutions out there.

Do you see blockchain playing a bigger part in procurement transformation?

There’s a lot going on around blockchain at the moment. We have the UAE government, for example, who have said that they will become the first blockchain government by 2020. And there are several practical examples of how blockchain is used around scanning trans-shipments etc. There are many other examples from around the world and the region. I think the reality is that blockchain is not yet an end-to-end solution. I think when it is, then you’ll see the benefits of the really embedded end-to-end blockchain solutions where people either have an in-house blockchain or a localised blockchain across groups of businesses; a corporate blockchain.

I think that’s where regions like the Middle East will come to the fore, because they are perfectly positioned to be leaders in the adoption of this technology. Because they don’t have a lot of legacy systems and practices to hinder their adoption of new technologies. They also have very strong advocacy at government level. If the UAE government, for example, says that they will become the first blockchain government by 2020. Well, that means that everyone’s going to have to participate in that transformation. Because if the government will make that a priority, then certainly everyone else does it. So, there’s a great opportunity for wide scale adoption of blockchain technology, when end-to-end solutions are implemented. Companies out here are very, very open to the technological changes. 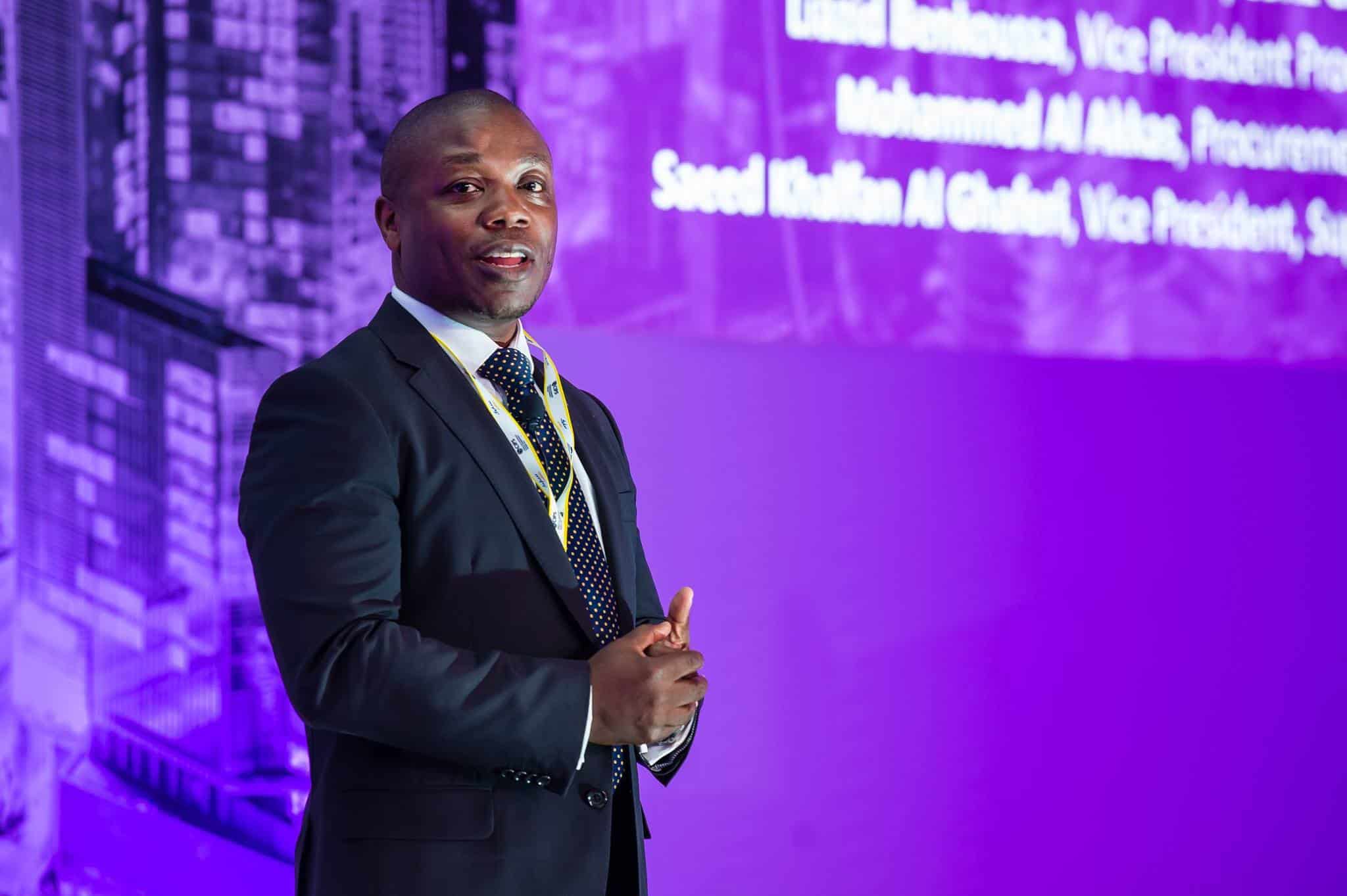